SOMM stakers participate in profit sharing on strategies being run on Sommelier. Typically a 1% management and 10% of performance fee goes to the Sommelier platform (and consequently to SOMM stakers).

We can therefore compare Sommelier protocol revenue to an inflationary model using the argument that investors won’t differentiate between the two if holding either token earns the same returns. We can project what kinds of TVL are needed to generate meaningful staking returns.

The Sommelier protocol earns $25M in revenue to stakers under a variety of different scenarios.

Because SOMM staking revenue depends on strategy performance and TVL, we will consider two cases:

In the bull case we assume that the average Sommelier strategy earns 50% revenue. The expectation is that the majority of Sommelier strategies will take directional bets on a variety of tokens. During a bull market the returns of a benchmark portfolio (consisting of e.g. ETH and BTC) easily reaches 50%, therefore we believe this number to be reasonable.

In the common case we assume an average return of 10% across Sommelier strategies.

We assume a 1% platform fee and 10% performance fee to the protocol. 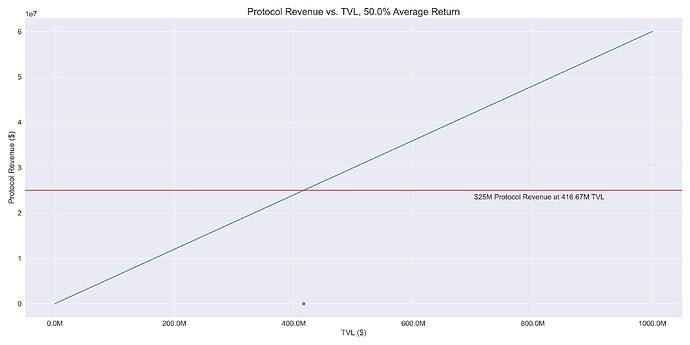 Assuming an average return of 50% across strategies (and a 1% management and 10% performance fee to the platform), we see that the Sommelier protocol reaches $25M revenue to stakers at a TVL of $416.67M. 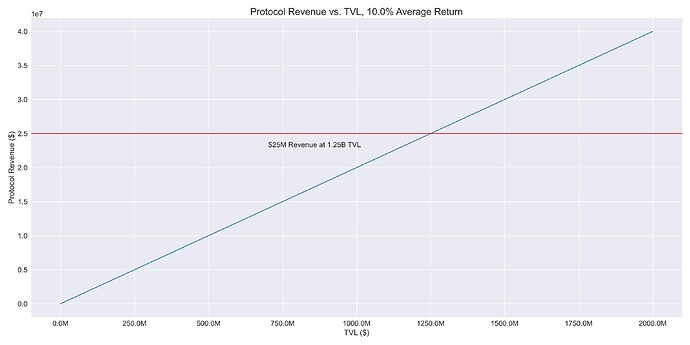 In the common case of 10% average returns across Sommelier strategies, we see that $25M protocol revenue is achieved at a TVL of $1.25B.

In what form and how often will profits be distributed to stakers?

Fees will be distributed in SOMM. Maybe someone from the protocol team can weigh in on how frequently

Hi Jake. The short answer is once fees are in SOMM-form, they will be distributed every block just like a normal Cosmos chain until the rewards run out (if new fees aren’t accrued/converted first). The process and timing of accruing fees and converting them to SOMM is unpredictable because it depends on how often fees are accrued (which can vary), whether the amount accrued is worth worth buying from the auction to a user, etc.

Early on, while there are few Cellars and infrequent fee accruals, reward APY will be low and inconsistent. As TVL and the number of Cellar increase, it will start to look more like the steady APY % you would expect to see on inflationary chains.

If you don’t know what I mean by auction, basically the protocol will take fees accrued in whatever denom they are in from the Cellar and sell them to the market for SOMM via a dutch auction system. The resulting SOMM will be distributed to stakers.

Interesting. So as the TVL of cellars grows, is it assumed the auctions will put upward price pressure on SOMM as time passes because the protocol will be continually buying a finite supply of SOMM to distribute to stakers?

Yes exactly. Assuming increase in performant strategies, this would be a very healthy effect on the price of SOMM.

GOOD. So as the TVL of cellars grows, is it assumed the auctions will put upward price pressure on SOMM as time passes because the protocol will be continually buying a finite supply of SOMM to distribute to stakers?

This website does not constitute an offer to sell or a solicitation of interest to purchase any securities in any country or jurisdiction in which such offer or solicitation is not permitted by law. Nothing on this website is meant to be construed as investment advice and we do not provide investment advisory services, nor are we regulated or permitted to do so. This website is provided for convenience only. Sommelier does not manage any portfolios. You must make an independent judgment as to whether to add liquidity to portfolios.

Note that the website may change, and we are under no obligation to update or advise as to these changes. There is no guarantee that the Sommelier Mainnet, including any software, products or token use cases mentioned on the website, will be built, or offered by Sommelier. In particular, actual results and developments may be materially different from any forecast, opinion or expectation expressed in this website, or documents contained in it, and the past performance of any portfolio must not be relied on as a guide to its future performance.

To the extent permitted by law, the company and its directors, officers, employees, agents exclude all liability for any loss or damage arising from the use of, or reliance on, the material contained on this website whether or not caused by a negligent act or omission. The release, publication or distribution of this website and any materials herein may be restricted in some jurisdiction and therefore you must inform yourself of and observe any such restrictions.